15 BIFF, 2 soldiers killed in operation against terror groups in Maguindanao

1 NPA terrorist with firearm dead after the clash in Cabanglasan 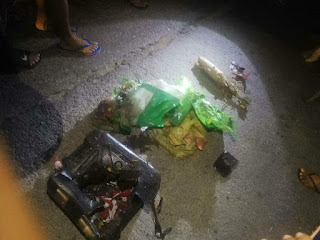 Found inside the water container were four81mm mortars, one 61mm mortar, two cellphones with simcard and electronic wires.
After 3 hours, another suspected IED was discovered by a civilian at a National Highway of Brgy Tamontaka, Datu Odin Sinsuat.
Troops of 90th Infantry Battalion, 5th Special Forces Battalion, and Datu Odin Sinsuat Municipal Police immediately responded and cordoned the area for safety procedures.
The 3EOD team arrived in the area and successfully disrupted the suspected IED. Recovered in the scene was unexploded ordnance of 81mm projectile, 1 booster, cellphone with simcard and detonating cord.
No one was harmed during the disruption of both IEDs, and the highway was opened for the motorists at around 3 in the morning.
The Commander of 6th Infantry Division, Maj. Gen. Cirilito E. Sobejana, said that the IEDs were intentionally placed to create harm and chaos to the people by the terror group of Bangsamoro Isalmic Freedom Fighters (BIFF).
“I strongly urge the civilian community to be on high alert at all times and to immediately report any suspicious things or person to the authorities to prevent the terrorists from sowing terror,” said Maj. Gen. Sobejana.
Share
Facebook
Twitter
Previous articleFormer Rebels in Bicol receive Enhanced Comprehensive Local Integration Program benefits from the Government
Next article23IB encounters NPA, recovers High Powered Firearms

CAMP CAPINPIN, Tanay, Rizal - "The more you sweat in training, the less you bleed in battle." These were...
Read more