Two soldiers were wounded namely Cpl Richard Solayao and Pfc Jeffrey Balangoy who suffered from minor gunshot wounds in the hand and leg, and were now on stable condition after given medical treatment. On the other hand it is believed that there were casualties from the enemy side due to the traces of heavy blood stains at the battle site; this is still being verified at this point. The troops seized the enemy camp after the NPAs withdrew, bringing along their wounded comrades.
The troops found one (1) M16 rifle, two (2) anti-personnel mines, three (3) bandoleers, five (5) jungle packs and subversive enemy documents left by the retreating terrorists.
Brigadier General Arnulfo Marcelo B Burgos Jr. AFP, Commander of the 202nd Bde who has operational jurisdiction over CALABARZON said that this encounter is another major setback to the remaining NPAs in Batangas which is now in the verge of collapse. 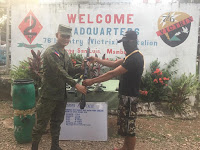 Meanwhile in Occidental Mindoro also yesterday, an active NPA member with M14 rifle voluntarily surrendered to the troops of 76th Infantry (Victrix) Battalion (76IB).
Lieutenant Colonel Mario Lito l Retirva, Commanding Officer of 76IB identified the surrenderee as alias Saba, Vice Squad Leader of Platoon Falcon operating in the northern areas of Occidental Mindoro.
Saba later revealed the arm cache of the NPA hidden and buried in the mountainous part of Purok Mamburao, Sitio Culasisi, Barangay Batongbuhay, Sablayan, Occ Mindoro. Five (5) serviceable M16 rifles were recovered by the troops thereat.
In an interview, Saba said that he returned to the folds of law after three (3) years of being an active NPA member, recruiter and extortionist realizing that what they were doing to the people is adversed to the ideology they believed. “Mali na ‘yong mga ginagawa namin, sir. Pahirap kami sa mga mamamayan. Marami na rin sa aking mga kasamahan sa loob ang nahihirapan at nais nang bumaba at batid na namin na mayroong magandang programa ang pamahalaan para sa aming pagbabalik loob”, he said.
“Bilang patunay na ako ay seryosong makikipagtulungan sa gobyerno natin sir, hukayin natin ‘yong mga nakatagong mga baril ng mga kasamahan ko, sir,” he added.
BGen Antonio G Parlade Jr. AFP, Commander of the 203rd Brigade in Mindoro said that the latest NPA surrenderee and recovery of five (5) other High Powered Firearms is a clear manifestation that the localized peace negotiation with the rebels in the province and the Community Support Program (CSP) of the troops and the Local Government Unit (LGU) is effective.
Major General Rhoderick Parayno AFP, Commander of the Philippine Army’s 2nd Infantry (JUNGLE FIGHTER) Division lauded the efforts of the 76 and 1IB especially the bravery of the wounded soldiers.
“We will relentlessly pursue these remnant terrorists until they are destroyed, caught or left no choice but surrender. We will treat their wounded and we will help those who choose to surrender like their former comrades who are now enjoying the benefits of ECLIP together with their families”, MGen Parayno said.
Under the Enhanced Comprehensive Local Integration Program (ECLIP), a former rebel can receive 15,000 pesos immediate cash assistance, 50,000 livelihood assistance, firearms remuneration, have access to housing, loans, medical and legal assistance, among others. It also includes educational benefits which can be extended to the rebel’s immediate family members.

Army acknowledged locals’ help for the capture of 3 NPAs in...