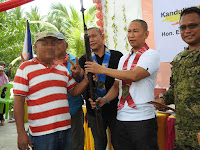 The surrenderees are members of the BIFF of Karialan faction under Commander Gani Saligan, who is still  hiding and a notorious rebel in Southern Liguasan Marsh area.
They brought with them six high powered firearms including one  M14 rifle, one  Garand rifle, one .45 Cal pistol, two homemade RPG and  one improvised .45 cal rifle.
Mama Abdul @Lapu-lapu, said that he wanted to support the peace initiatives of the government. The surrenderees have realized the futility of their cause after the land conflict in Brgy Midconding had been resolved through the Army troopers.

The surenderees were presented to Governor Esmael Mangudadatu, GSKP Mayor Bonnie Kali, and Assemblyman Toy Mangudadatu at Brgy Hall in Midconding, General SK Pendatun, and further received twenty thousand pesos each as cash assistance from Congressman Zajid Mangudadatu.
.
“The surrender is a welcome development in our on-going effort in supporting the peace and development agenda of the government. We would like to transform Liguasan Marsh from a battlefield to an oilfield that would bring economic prosperity for the Moro people and Mindanao region as a whole,” said Major General  Cirilito E. Sobejana,” Commander of 6th Infantry Division.

3ID Commander sets the tempo on intensified operations against NPAs

6th ID sends off new Privates to different units of the...

Court of Appeals Decision on the DISMISSAL of the Petition for...

Kalinaw News - November 18, 2019 0
MANILA – The Court of Appeals (CA) junked the petition for habeas corpus filed by the family of a 24-year-old female communist rebel,...