More than 400 IP residents trooped to the multi-purpose hall of said brgy and joined the peace caravan. Lumads availed the services and have received food packs from the government such as Medical and Dental Services with Free Medicines, Porridge Feeding, Distribution of Food Packs and Vegetable and Falcata Seedlings, Free Haircut and Children Parlor Games.

The peace caravan was derived on the concept of bringing message of peace and the government closer to the people anchored on the precepts of peace presenting all government interventions thru the delivery of basic services, information education campaign and community dialogues to address peace and security issues.
Datu Rico Maca, IP Mandatory Representative of San Miguel, Surigao del Sur present during the activity said in his statement “Dili ta muabot dinhi kun walay problema sa kalinaw, sa tibook munisipyo sa san miguel isa kita sa pirmi highlights sa media o sa facebook”. He further stressed that he had done nothing wrong in advancing the interest of his tribe especially to uplift the standard of education for Lumads. He sought support, bcondemned the CNT and encouraged them to surrender under the Enhanced Comprehensive Local Integration Program (E-CLIP).
The Peace Caravan in Brgy Bitaugan was the 2nd time for this year in the said town considered as conflict affected areas and geographically isolated and disadvantageous area. The first was in Sitio Nalindog, Brgy Bolhoon, San Miguel, Surigao del Sur last October 26, 2018 which resulted to the initial dialogue with IP Leaders and Brgy Officials.

“Gusto nako ipabilin natu ang kalinaw, magmalinawon ang atung lungsod sa San Miguel kung kita magtinabangay”, said in a vernacular Hon Alvaro Elizalde, Municipal Mayor of San Miguel, Surigao del Sur. (I want that we maintain peace, we can only attain peace if we will help each other).
In his statement, Lt Col Xerxes A Trinidad PA, Commanding Officer of the 36IB, said “Brgy Bitaugan became a beneficiary for the Peace Caravan because as per assessment and validation, it is classified as CPP-NPA Terrorist “influenced area” wherein CNT is frequenting the area with presence of critical mass support. Hence, the Peace Caravan was a response to inspire unity to address peace and security concerns in the said barangay and hilly calling for peaceful means to end conflict and seek disapproval of all support to the CNTs in line with the AFP Community Support Program”. 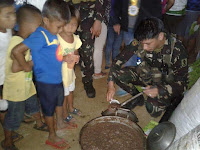 Brgy Bitaugan is a Lumad Community and a four (4) hours trek in rough road from Poblacion of said town with only Sadam Truck and single motorcycle as means of transportation.

Six former communist terrorists returned to the mainstream of society