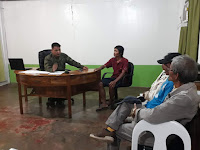 According to Jerry, his son, 3rd among the siblings known to them as “Noyoy”, is supposedly working in Taganito Mining Corporation (TMC) in Claver, Surigao del Norte as member of Special CAFGU Active Auxiliary (SCAA). However, upon verification of this unit to the different mining companies in Surigao del Norte, the identity of said person working as SCAA or even an employee proved to be nil.
In his statement, Lt Col Trinidad PA said, “we are thankful that the dead body will be laid to rest and will be given proper burial as someone has surface to claim the cadaver. As per coordination with the PNP, some procedures must be observed to ensure that the body really belongs to the claiming family. A test and forensic examination was done yesterday, October 9, 2018, to the caliming family member and the cadaver to match their DNA”. 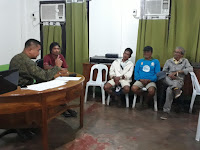 Jerry further disclosed that he only knew about his son’s death when he was forced by the CNTs to proceed in the mountainous area in Brgy Bolhoon of San Miguel town to personally inform him. He was Surprised and shocked learning that his son, Kevin, has already joined the CNTs and died in an encounter against the government forces last September 7, 2018 in the vicinity of Brgy Hinapuyan, Carmen, Surigao del Sur. Outraged by his son’s fate in the hands of the CNTs, Jerry intends to file charges against the CNTs for their wanton deception and luring their innocent son to join their armed struggle.
“This is again another heartbreaking story of a parent who lost a child due to CNTs deception. The CNT will not cease to recruit innocent civilians to join their armed struggle just to seize political power. We call on the parents to be aware and alert of their children on the deceptive strategies of CNTs in recruiting the youth”, Lt Col Trinidad added.