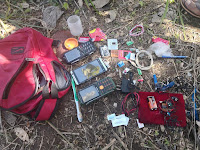 Sahak was resposible for series of atrocities and bombings. He was one of the suspects charged with Multiple Frustrated Murder in connection to the IED explosion transpired last September 16, 2018 at Purok Malipayon, Barangay Apopong, General Santos City that injured at least 8 individuals.
Accodingly, Sahak was in-charged of liquidation operation and money-making activities. He managed the AKP finances and had direct contact with Abu Toraife, the leader of ISIS-Inspired Dawla Islamiya Group that operates in Maguindanao, Cotabato and Sultan Kudarat.