The information on the presence of the female rebels was provided by a concerned citizen residing in the area.

According to the information, the rebels were conducting recruitment, propaganda activities and extortion in the community. 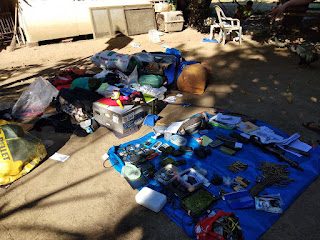 Joint elements from the 7ID units and the Criminal Investigation and Detection Group (CIDG) Nueva Ecija with Municipal Police Station, Rizal, Nueva Ecija acted on the information and proceeded to the barangay. Upon arrival at the area, the government troops found two amazonas recruiting residents. One of them was caught carrying a rifle. Two other female rebels went out of a nipa hut nearby and were caught with firearms, various ammunitions, explosives and Improvised Explosive Devices (IEDs).

Arrested CNTs are in the custody of CIDG for investigation. Elaine Emocling has been identified as a student from the Polytechnic University of the Philippines (PUP). One of the schools in the list of the Philippine National Police (PNP) that are allegedly targetted as possible source of NPA recruits.

It was only yesterday when the 7ID released an article warning parents and teachers of the danger of their children and students being recruited by the NPA. Several names of students whose lifeless bodies were discovered after an NPA and government forces encounter within the 7ID area of responsibility (AOR) was even mentioned to emphasize the gravity of the matter. Emocling is fortunate that she was caught alive and can still have the chance to start over.

Major General Felimon T Santos Jr AFP, Commander, 7ID appreciated the continuous cooperation of the community within the division’s area of responsibility. He said that what happened yesterday is a great development as the community is more aware of the deception activities of the Communist Terrorist Groups (CTGs).

You don’t have territory in PH, Duterte to Reds

3ID Commander: Giving former rebels a chance to live a new and normal life is our greatest accomplishment in 2019

Kalinaw News - December 25, 2018 0
Makilala, North Cotabato - Following the information from concerned citizens regarding the presence of NPA terrorists at the hinterlands of Brgy Sibulan,...

VIDEO: What is a Soldier of the Philippine Army?