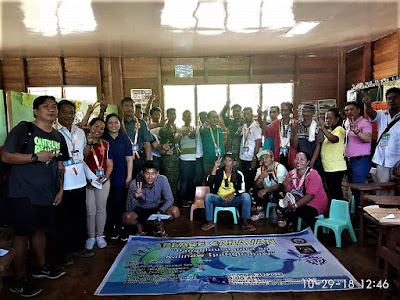 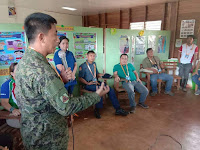 According to Captain Francisco Garello Jr PA, spokesperson of the 36IB, the peace caravan and dialogue was held in Sitio Nalindog in Brgy Bolhoon, a more than one (1) hour drive from the municipal of said town, so that services and the dialogue shall be community based in order to manifests the sincerity of the government and deliver the message of peace and at the same time denouncing the CNTs in its recent spate of killings of Tribal Leaders and show support and commitment to the threatened lumad communites.
“gipatay ang ako bana na walay kalaban laban. Ang mga gipasangil sa iyaha nga sala, tumo tumo ra kato. Nangusog ang ako bana nga mutabang sa mga kaigsoonang lumad pinaagi sa pagpakusog sa SLT apan gisilutan kini sa mga NPA nga walay kalooy”, Racquel Brital, wife of datu Rexan Brital, said in their vernacular language teary eyed during her talk on the brief program of the caravan.

During the dialogue attended by Mayor Elizalde, IP leaders and Purok Presidents of Sitio Bishop, Tubod and Nalindog with Brgy officials, San Miguel MPS, 36IB Philippine Army, TESDA SDS, ALS DepEd, Mun IPMR and Tribal Chieftain and the NCIP, issues such as sustainable livelihood in their ancestral domain, Lumad killings, IP education concerning the TRIFPSS were raised.
In his statement, Lt Col Xerxes A Trinidad, Commanding Officer of the 36 th Infantry (Valor) Battalion said, “the Philippine Army will focus and pursue resolving issues in the geographically isolated and disadvantageous areas which were made as haven and staging area of CNTs in their terroristic activities. Your soldier here in this province in close collaboration with the local government unit and other stakeholders will be relentless in combatting the causes of the insurgency problem. While we confront the armed component of the CNTs, we admit that there is a legitimate issues that needs to be address and we’ll always be here to support the LGU and show our commitment in attaining peace and development in every IP community”.
Lt Col Trinidad added that the issues raised will be again tackled for the next dialogue.