Home Press Release Another Lumad leader murdered by CPP-NPA terrorist in Surigao del Sur
Share
Facebook
Twitter
Tago, Surigao del Sur – Another Lumad, a Datu in his Tribe, was murdered by CPP-NPA Terrorist (CNT) in San Miguel Surigao del Sur at around 5 o’clock in the afternoon, October 10, 2018.
The helpless victim was identified as Datu Rexan “Loloy” Liwanasan Brital, male, married, 36 years old and a resident of Sitio Nalindog, Brgy Bolhoon, San Miguel, Surigao del Sur. While on his way back home from a household labor, he was ruthlessly shot several times by four (4) gunmen believed to be CNT members and suffered six (6) gunshot wounds that caused his instantaneous death.
Brital is a Manobo Tribe Leader and a former PIO of the Tribal Filipino Program of Surigao del Sur (TRIFPSS) in his community who recently shifted support to the DepEd accredited IP School known as School of Living Tradition (SLT). He also exposed the irregularities in the curriculum of TRIFPSS in his testimonies wherein their children were taught of radicalization against the government. He is a strong Lumad leader advocating for the right education of their children in the tribe and condemns the wanton killing of Lumads by the CNTs.

The murder of Datu Rexan Brital by the CNTs and threatening the community is a crime against our laws and an outright violation of the International Humanitarian Law (IHL) under Republic Act 9851 which is enacted and crafted to protect non-combatants and innocent civilians from any conflict between states and non-state actor. 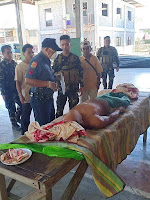 In his statement, Lt Col Trinidad PA, Commanding Officer of 36th Infantry (Valor) Battalion said, “We offer our sincerest condolences to the bereaved family and the entire Lumad community. Again, this merciless killing of Lumads by CNTs depicts their group of being tagged as terrorist instilling fear among tribal communities to demand obedience for their skewed ideologies towards an armed struggle against the government. It also shows that the CNTs are losing their clout to its mass bases that they resort to such desperate actions. We will press the fight against these ruthless murderers to bring justice to our innocent and peace loving Lumads”.
His remains now lie at his residence at Sitio Nalindog, Brgy Bolhoon, San Miguel, Surigao del Sur.