KICHARAO, Agusan Del Norte- The Former Rebels (FRs)assisted the members of the Fraternal Order of Eagles, Cabadbaran City, Eagles Club in the...
View Post
Two improvised explosive devices (IEDs) exploded in Barangay Poblacion, Ampatuan, Maguindanao on Friday (October 26).
The first explosion transpired around 8:40am just 400 meters away from the troops of 2nd Mechanized Infantry Battalion who visited the area to conduct an activity for the community.
While the troops were approaching the blast site, another suspected IED exploded at about 100 meters away from the first location.
No casualty was reported during the incident. 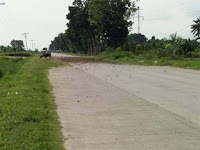 Troops immediately secured the blast sites and conducted road clearing to secure motorists passing in the area while the 32nd Explosive Ordnance Disposal Team immediately responded to conduct safety procedures and assessment.
Composition of the 1st IED include 81mm unexploded ordnance while the second was made of black powder placed in a can.
As per investigation and reports from the civilians in the area, the explosions were perpetrated by the Bangsamoro Islamic Freedom Fighters (BIFF) under Samad Simpal.
6ID Commander Major General Cirilito Sobejana commended the troops and all the residents of Central Mindanao for supporting and cooperating the Command’s efforts to make the region a conducive place to live.
He also ascertained that Simpal was responsible for the series of harassments to the military troops and detachments to take revenge.
“We deeply condemn these desperate acts of the BIFF. We encourage all the citizens to be one with us in our campaign to eliminate all the remaining militants so that peace and prosperity will soon be attained,” said LtGen Arnel B. Dela Vega.
Share
Facebook
Twitter
Previous articleArmy, Rescues Youngsters Cast Away from the Seashore
Next articleSoldiers overrun NPA encampment in Batangas; NPA in Mindoro surrenders, reveals arm cache

1 NPA terrorist with firearm dead after the clash in Cabanglasan